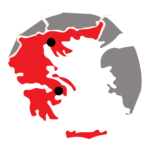 The Hellenic Red Cross was founded on June 10, 1877 and subsequently recognized as part of the family of the International Red Cross and Red Crescent Movement. The largest humanitarian organization in Greece, HRC is committed to international humanitarian principles, providing humanitarian aid with impartiality regardless of gender, nationality, race, political opinions or religious beliefs. More information in the official website of Hellenic Red Cross http://www.redcross.gr/default.asp?pid=7&la=1.

The Social Welfare Division of the Hellenic Red Cross was established in 1964, with the aim of providing Social Services, in accordance with the principles and ethics of Social Work. The Social Welfare Division examines the social needs in order to design and implement programs to address modern social problems and protect vulnerable populations (long-term unemployed, single-parent families, people with disabilities, the homeless, immigrants, refugees, etc.).

Hellenic Red Cross through the Social Welfare Division operates the Multifunctional Centre for Refugees, a program located in two cities.

One is based in Athens to serve Central Athens intensively and the Attica region, while the other is set up in Thessaloniki to serve the urban area of the city and the Northern region of Greece. The philosophy of a multi-functional social centre targeting refugees and migrants has existed for more than 20 years. The Athens MFC has been functioning since 1997.  The Thessaloniki MFC was established as an aftermaths to the” refugee crises” of 2015 and has been operational since end of November 2017.